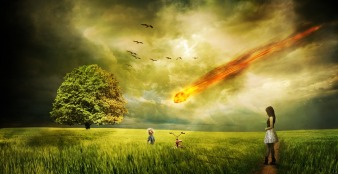 What are the real problems facing society? I’m not talking about the issues that take the most space on cable news channels, or in the remaining newsprint options available, or on internet boards. No, I’m talking about the issues that face humanity across the globe, issues that threaten our well-being and the health of the planet that we share as a species. This post is a discussion of what I consider to be the 7 most critical problems that we face, with a little explanation as to why they are so critical. They are posted in inverse order. That is, the least important is presented first, and the most important is last.

7. Celestial billiards. With increased sensitivity, we are now learning how many objects out there in space may have Earth’s name engraved on them. It seems that almost monthly we hear about an object of substantial size that will pass, or has passed within a few 10’s of thousands of miles of Earth. Efforts are being made to catalog all objects that may be an existential threat to life on Earth, and we will likely see an attempt made on some object in the future to alter its orbit, just to prove that the capability works before we need it. But space is huge, and we are small, but just large enough to serve as a target in the ongoing game of celestial billiards.

6. Infectious Diseases. This problem has two main causes. First is antibiotic resistance. Having been given the magic bullets of antibiotics in the 1940’s, we applied them everywhere. Go to the doctor for a viral cold? Ask the doctor for an antibiotic. Learn that antibiotics lead to faster meat animal growth? Apply low dosages of antibiotic to animal feeds, ensuring the maximum exposure to antibiotics in the environment. And now, 80 years later, resistance to antibiotics is emerging everywhere, and it is doubtful that new antibiotics can be developed at a fast enough rate to compensate for the loss of effectiveness of standard antibiotics. We may later look upon the brief period of antibiotic effectiveness as the golden age of human longevity. Add to this the possibility of viral diseases such as Ebola becoming global pandemics due to the increased interconnectedness of our society, and we face potential crises of infectious diseases in the future that are intractable.

5. The Rise of Willful Ignorance. This is different than denial of scientific truths, although many who are willfully ignorant also deny findings from science. This is a recent phenomenon, and it manifests itself by deriding subject matter experts as “elitists” who are out of touch with the human experience. Its adherents find solace in anecdotal evidence, and evidence shared second and third hand via the internet. It includes those who decry fake news while sharing the latest conspiracy-laced rumor without a shred of physical evidence. Why? Because those shadowy figures who control the mass media are trying to foist their elitist world view down the throats of the normal hard-working silent majority, and thus we cannot trust anything that they say. Those who follow this practice will ignore all real evidence against their beliefs, up to the point where their ignorance costs them their lives.

4. Sea level rise. Regardless of the source of the warming, it is abundantly clear that ice is melting, especially in the arctic, the surface ocean waters are also warming and expanding, and that will result in sea level rise. Since so much of humanity’s population is settled on or adjacent to the ocean shore, ongoing sea level rise will cause massive human displacements in the underdeveloped world, and will cause unimaginable damage to infrastructure in developed nations. The local communities on the front lines of the struggle are trying to deal with the issues, but unless and until we recognize that sea level rise is inexorable, and that we need to deal with it both on a national and trans-national level, then we will incur excessive costs due to our intransigence at denying that there is indeed a problem. And the refugees that are flooded out of their subsistence farms in Bangladesh and other countries will dwarf the number of refugees that came from the Syria conflict.

3. Tribalism and Denialism. These two items are strongly linked, since there is evidence that the political movements most identified with tribalism and nationalism and isolationism, are also the political movements most engaged in the denial of demonstrated scientific principles. Tribalism is troubling since it assumes that all of our problems are the result of “others” encroaching on our borders, or serving as a fifth column within our borders. It denies that there are problems that are trans-national in nature, that can only be addressed effectively by multi-lateral efforts. Thus any effort to reduce the growth of carbon dioxide in the atmosphere is ridiculed, since all true tribal believers know that CO2 is a fertilizer for plants, and besides, 400 parts per million is too small to affect the thermodynamics of the atmosphere, and besides, whatever we do in our country will be overwhelmed by the developing countries increasing their emissions, and besides, who are we to think that we are as powerful as God. You can go through any series of logical sequences for any of the problems that are fostered by tribalism and denialism, but the bottom line is that a tribal world sees others as a threat, and focuses non-productive energy on preventing incursions from others, while excluding any problem that is truly global in nature from being worked on.

2. Human-induced extinctions. Ever since humanity learned how to craft weapons and hunt creatures larger than ourselves, we have served as agents of extinction. During the last two centuries, the pace of extinctions has grown exponentially, so that now the rate of extinction is estimated at 10 to 100 times the natural rate of species extinction. Whether it is through habitat elimination, or overfishing, or introduction of non-native species, or through unintended effects of herbicides and pesticides, all of these conditions are removing species from the Earth. We do not know what effects there will be by changing the composition of the web of life. But the fact that we appear to be such poor stewards of the Earth that we believe we are the only species that matters, is one for concern.

1. The number of people on Earth x the resource consumption per person. In higher math, it is often the cross-product that is the variable of interest. Here we have a cross-product that represents the amount of resources that we are extracting from the Earth at a given time. Both factors are increasing, and we are finding physical limits on what we can do to address this problem. This problem exacerbates other critical problems, such as anthropomorphic global warming, plastic pollution overwhelming the oceans, creation of dysfunctional mega-cities, and increasing the risk of the collapse of natural systems.

This represents my own list of concerns that can develop into existential crises for life on Earth. As such it is an extremely arbitrary list, and others should work to develop their own lists. Some of the things I excluded from the list include the rise of Artificial Intelligence, and its effect on employment. Also, I excluded scientific terrorism, like developing a super virus and unleashing it on the world. Even basic terrorism failed to make the list. Nuclear engagement is not on the list, although many of the problems I describe could have a nuclear engagement as a likely outcome if they are taken to extremes. Later posts may tackle some of these concerns and discuss potential solutions for them.

4 thoughts on “Where the Wild Threats Are”