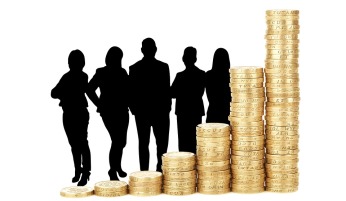 One of the greatest problems that we face as a country in the US, is that too many people end their working life without assets they can use for their years after work. Another issue is that many people do not benefit from overall improvements in the economy. They have no stake in the game. And a third problem is that Social Security will exhaust its trust fund within a small number of years. For the third problem, there are solutions that will push the day of reckoning for Social Security out decades longer into the future (raise the taxable base, limit further the benefits paid to workers who earn well above the median wage, small increase in the Social Security tax rate). But I’ve not seen any proposal to solve the first two problems. This post provides a potential solution for these critical issues.

First, some background. The Standard & Poor’s 500 stock index, known as the S&P 500, is an index of the largest companies by stock valuation that trade in the US. Since 1926, it has included at least 90 companies, so that its performance is nearly a century old. Since 1957, it has contained 500 stocks. If you invested money in the index in 1928, just before the Great Depression, it would have earned an average of 9.6% per year if you continued to reinvest the dividends. So over time, the investment earned at a higher rate than investing in bonds, and that covers all of the stock market declines since then. Other stock indexes exist that track US corporations, and they show similar rates of growth over time.

The proposal is this. Out of the current 12.4% of employee contribution (split evenly between employee and employer) that currently goes into the Social Security fund, allocate 2% of new employee contributions into a personal account that invests in a stock index fund of companies based in the US. All dividends from the stocks will be reinvested into the personal account. At the time when a person takes Social Security payments, this person will have the option of converting the account to an IRA rollover, or converting it to an annuity.

A simple spreadsheet model shows the potential value of this approach. For someone at the lower end of the income spectrum, a person with salary income of $30,000 per year whose salary increased by 3% per year for a 40 year working career, the personal account would be worth $220,000 assuming that the accounts earn an average 8% per year. The 8% is less than the 9.6% average of the S&P for the past 90 years. This would enable someone who retires to have a significant account that reflects the growth of the economy during their working years. If they choose to select the security of an annuity, it would be administered by the Social Security system in order to avoid additional expenses of going through an insurance provider. Using an annuity calculator, the income for a 67 year old investing $220,000 would be about $1200 per month. This would be a significant increase in the benefit available as compared to the Social Security benefit for an individual.

What would the effect be of this money being funneled into the stock market? It would be relatively small. In 2016, the amount of money going into the Social Security system accounts from wages was about $700 billion. The proposed personal account would be about $110 billion per year. That amount of increased demand for stocks would raise valuations somewhat, but the investment markets should be able to absorb the incremental demand for investment. This would need to be modeled by real economists, instead of armchair analysts armed with Excel spreadsheets.

Those who are wary of stock investment will point to the inherent risk of stocks. And yes, there will be times when the value of personal accounts will go down on a year over year basis. But the nature of the equity markets has tended to go up when viewed on a longer timescale, such as a person’s working career. Perhaps there could be a personal option for those who are philosophically opposed to investing in stocks, but it would be one that people would have to select, instead of being the default option.

Those of us who have had the fortune to be able to invest over a lifetime, know the benefits of our economic system. We’ve been able to build up our pile of equity. But many folks will work their entire lives and have little to nothing to show for it, except for a Social Security payment. This suggestion would allow for everyone to have a stake in the economy, and would allow for individuals to either opt for the security of annuity payments for their lifetime, or to assume control of a personal account for their own benefit, and for the benefit of their heirs. I believe it is time to think outside of the box in order to attack some of the intransigent problems that this country faces.

Back during the administration of G. W. Bush, Social Security privatization was proposed, and quickly abandoned due to the outcry from many supporters of the system. Those proposals included more diversion of accounts than this proposal, and added more complexity in terms of investment choices. This approach keeps it simple, stupid. And since it rolls out so gradually, everyone would see how well their accounts are doing over time, and should be pleased with the long-term performance of their fund. It’s been nearly 15 years since the last attempt was made to enable private accounts. It is past time to reconsider the approach, and recognize that this is a populist proposal instead of a free ride for Wall Street.