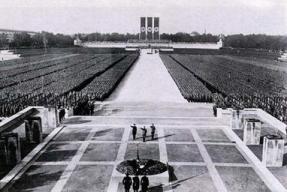 Where are we now, sixteen months into the unprecedented chaos that the Trump administration has unleashed? We now have enough data points to do a regression analysis on the trends we are seeing. Let’s review some of the highlights of this journey we are travelling on together.

We’ve watched the baby steps at weaving a cult of personality around our leader. We’ve learned that personal loyalty to this President takes precedence over any and all qualifications or accomplishments. We’ve seen the cabinet love fests where each cabinet member expresses their best fawning statements about the honor and privilege it is to sit at the feet of the master. We’ve learned that our dear leader is most fulfilled when he is holding a Nuremburg-style rally out in fly-over land (and I live in fly-over land). Hearing the waves of adulation and blind adoration charges the President up enough to face another hard week of executive time watching Fox and Friends.

We’ve confirmed the statements Trump made in his campaign where he discussed his foreign policy advisors, basically admitting that he uses his own gut instinct as his north star. In March 2016, before he began his self-imposed exile from Morning Joe, he said “But my primary consultant is myself and I have a good instinct for this stuff.” Confirmation of this approach for foreign policy is exhibited in the failure to staff and support the State Department. Additional confirmation came with the decision to move the Israel embassy to Jerusalem, thus appeasing Christian Millennialists who see Donald Trump as an enabler of God’s will. Nowhere is the disparity between the unilateral actions taken by this administration, and the reality of the apartheid of Israel more evident than the slaughter of demonstrators at the Gaza fence on the day that the new embassy was opened. We’ve seen the benefits of impulsiveness as a foreign policy strategy through the well-thought out tweets that flat-out contradict what was supposed to be the position of the US.

We wait to see if there will be good consequences coming out of the upcoming Korea summit. This should give a validation as to the effectiveness of the Trump policy of shaming and name-calling in the name of diplomacy. Will such a policy gain valid results? Or will Donald Trump be swayed by the grandeur of the moment, and the ability of the North Korean leader to play on Donald’s emotions, such that he simultaneously declares victory while handing carte blanche to the North? I will be surprised if a truly good outcome results from this effort. If it does turn out good, I will admit that I was wrong, and give credit where it is due. My sense is that the odds of a good outcome are slim at best.

We’ve seen how the shell game master works as he oversees the efforts to fulfill his populist campaign pledges of draining the swamp. Too many regulations are stifling the finance industry as it tries to fulfill its vision of providing valuable services to underserved people! Therefore, we must castrate the Consumer Financial Protection Bureau, since it was over-regulating the payday lending industry, and preventing it from gouging the most vulnerable citizens of our country.

Too many regulations are stifling the for-profit college and education industry from fulfilling its mission of enriching investors while sticking its customers with exorbitant debt and a worthless degree that doesn’t lead to a job. So staff Betsy DeVos’s Education Department with for-profit college executives so that we can reverse the enforcement actions that might have given relief to the thousands of former students who had been ripped off by for-profit diploma mills.

Too many environmental regulations were developed using data that is not totally transparent (so says the little Caesar running the EPA). Therefore, if regulations developed in the past used medical data where all of the data cannot be made public due to patient confidentiality, these regulations must be reviewed and possibly reversed due to the lack of transparency. This is one of the most insidious efforts going on, where by declaring that we are in favor of motherhood, and baby bunnies, and data transparency, it will actually enable the gutting of regulations that have been in place for many years. So the industries that cut emissions due to public health benefits, will be able in the future to relax their compliance and continue to emit particulate and other pollution and contribute to the deaths of thousands each year, all in the name of data transparency (and corporate profits).

Sixteen months into this administration and we’ve seen the ongoing diminution of our culture due to the example provided us by its leader. An explosion in anti-Semitic language in on-line postings, a claim that white supremacy is normalized by asserting equivalence to those who protest against the supremacists, the lack of civility shown by White House aides towards a dying Senator, all of these are symptomatic of the virus being spread from the top. But what were we to expect when we had the image of spastic movements purported to be that of a reporter with a muscle disease? It’s just fine and dandy and a good visual to mock the disabled. And what were we to expect when we heard entire nationalities dismissed as just hardened criminals wanting to set up shop in the US to enhance their criminal career? No, we knew what we could expect from this administration from the start. Its leader played to the baser nature of his supporters, and this is part of the attraction of the rallies. See, you can manipulate the audience to whip them up in a fervor by using simplistic slogans and group chants. Crowds feed on themselves, and now that we have the on-line community, incivility begets worse through the chat rooms, and message response threads.

Sixteen months into this administration and we see who it is really intended to assist. The benefits of government largesse have flowed to the corporations and to those who will benefit the rigging of the tax system to slash personal tax rates. Some of the saddest scenes from these past months came when administration officials and Congressional leaders tried to spin the tax cut bill as preferentially favoring the middle class. “See, since the corporations you work for are going to be soooo grateful for this tax cut, they will want to share it with you. A thousand here, a few hundred there, and pretty soon you’re talking about REAL money.” The spin was at about 50,000 rpm on this one. And in the midst of this, we had those images of ‘Murican families smiling as they contemplated their $2000 in annual benefits, on the commercials paid for by shadowy groups who fail to divulge their origins or funding. So we did get a business tax adjustment, and that was necessary in order to stay competitive globally. But as usually happens when one side of the political spectrum refuses to deal with the other side, the cuts went too far, and the effect on the deficit was dismissed since the supply-side pixie dust will generate growth in the economy as far as the eye can see.

Meanwhile, any semblance of an infrastructure bill that would address the horrendous conditions of our roads, sewers, electric grid, water supplies, and other transportation venues, that infrastructure bill slumbers on peacefully. Slight susurrations emanated from the administration on how to leverage $200 billion in public funding into $1.5 trillion in total infrastructure spending, if we accept the wonder of public – private partnerships which would transfer ownership of public infrastructure to private hands.

It is clear after 16 months of failed leadership that there are only two purposes this administration is aiming for. And they seem to be succeeding in their efforts to fulfill these purposes. The purposes are: 1) Enrich the corporate and capitalist classes by slashing taxes and eviscerating regulations; and 2) Stroke Donald Trump’s ego. Any serious attempt to deal with the problems of this nation and of the world are dismissed as not fulfilling the two purposes of this administration. Any mention by the media of the fallacies uttered hourly by administration representatives is castigated as “fake news from the failing media”. Any suggestion that the administration is working for the detriment of those who saw Donald Trump as an economic savior is derided as not being worthy of a response.