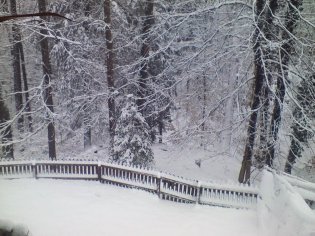 Whose woods are these? They’re mine, you know. And they are really filling up with snow.

When you are retired, the concept of a Monday doesn’t resonate quite as badly as during a work week. But last week, we truly had a Monday. It started in the cold morning as the temperature was down to low single digits, after having been below freezing almost continually for 2 weeks. This was the longest sub-freezing cold streak I can remember since moving here in 1986. It finally got above freezing on Sunday, and the temperature in our unheated garage rose enough to allow water to flow through the copper tubing and find the hole which had burst during the extended freeze.

My wife was getting ready to go to the Rec Center to do her water exercises, but she heard water running. Never a good sign when you have no reason for water to be running. Turns out we now had an improvised car wash that was knocking the salt off of our car inside the garage. I stumbled downstairs in response to her call out to me, and was able to turn off the flow of water by closing the two valves leading out to our garage. Now the takeoff for this water line is upstream of the main house shutoff, so later this year, we will be plumbing this whole thing up right, including relocating the takeoff to downstream of the shutoff valve, and providing heat tape for the section of the line in the garage. Fortunately for us, we caught the leak shortly after it started, so no water damage, and we won’t be using the outside hose for a while.

Later on Monday we had cabinetry installed, so the kitchen was full of workers. Then we had a backup in our weirdly configured plumbing down in our laundry room, where the combined effluent from the kitchen dishwasher and the washing machine was backing up out of the floor drain and flowing across our basement floor. Discovered this just before I had to leave for a previously scheduled dental appointment. So I had to leave the mess to Carrie. An hour later, the workers from Roto-Rooter were in the driveway along with the cabinetry folks. I parked on the street but they had gotten the plug loosened (was related to the cold weather but wasn’t a frozen line). So add it all together, and I figure we’ve had enough Monday mishaps to last us for months.

Winter has settled in on our house, after having left us virtually untouched the last few years. Still not much snow – the 4″ we got this week was the biggest snowfall we’ve had, and it was so fluffy I could push it and not have to lift it. So the snow blower has yet to receive its first workout of the year.

The local birds and squirrels are pleased with the buffet laid out for them on our porch. Actually haven’t seen too many squirrels, but the morning doves come in droves. When I open the porch in the morning, the whirring of their wings as they take flight echoes from the feeder, the porch rail, the floor. We must have 6-8 of them who are focused on our feeder at times. The suet feeder is attracting many different birds, including a misplaced mockingbird I saw the other day. I always thought they migrated away, but I saw one last week at the suet.

Its seed catalog time. This is the time when the marketing team for the Burpees and Gurneys and other seed vendors arrive unbidden, and they bring the hope and dreams of spring and summer. I have a new raised bed to install, replacing a 4″ x 4′ x 4′ with a 15″ deep x 3′ x 4′ version. When I made my garden 3 years ago, I crowded the beds too much, leaving inadequate space between beds. Plus my knees are much worse than they were, so having a 15″ high bed will be very nice. As the other frames deteriorate, I’ll likely change them as well. One thing I’ll say is that you will never receive a positive cash return if you are using raised beds for gardening. They are expensive and their yield is less than you’d need to make money from them. But if you just love to have the fresh vegetables, and enjoy the work to make things grow, the return is more than positive. The dreams of spring grow apace in winter.

The daffodils of spring are starting to poke their heads up. As the snow melts on the banks, you can see the green shoots start to emerge. They are smart enough to not grow excessively for a while, at least until the temperature really warms for multiple days. But for us, the earliest harbingers of spring will be the crocuses that pop up all over the lawn. I’ve never known how these corns moved all over the lawn, but they have naturalized everywhere. There will be some of them that will emerge on the first 70 degree day, but not yet. The snow must leave and the robins must come back before they make their appearance.