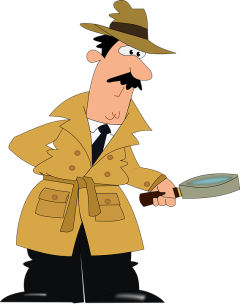 The grizzled detective pondered the crime scene laid out before his eyes. He pushed back the brim of his hat, bent down, and reached out to touch the cooling body of one of the victims. He rolled the body over, and it was apparent that the victim had fallen upon his own sword. Same posture as all of the others who spread drying blood into the exquisite carpets of the cabinet room. The detective looked over to his assistant, who held a notebook and pen, awaiting the wisdom about to come from the veteran crime solver.

“It appears to be a severe case of Stockholm Syndrome,” said the detective. “Notice how all of these Cabinet Secretaries, Senators, and Congressmen, all managed to off themselves with what was available to them.” The detective pointed over to one of the victims, who obviously had a difficult time in offing himself. All he had was a letter opener, and it was clear that he had fallen repeatedly upon the less than sharp point until it pierced his heart.

The detective turned away from the scene in front of him in disgust. “We’d best go and take a look at the scene as it played out.” Fortunately for posterity’s sake, all of the meetings in the cabinet room were now televised live. The cameras ran unattended, which kept the lying media from having a presence in the room. The cabinet room’s new nickname was Soundstage 3, befitting the experience of the resident of the house. For the resident understood a good show, and slowly his administration became the highest profile reality TV show ever scripted. You can assume a regal posture if you only have to be on your best while the cameras are rolling.

The scene was cued up for the detective to peruse. At first, nothing was different from many of the previous meetings in this room where both cabinet members, and Republican members of the House and Senate gathered. They each took turns heaping unadulterated mounds of fetid praise upon the personage of the resident of the house. One after another, each speaker offered their undying gratitude towards the resident, the whole session an attempt at one-upmanship, where the trick was to employ the most cloying and excessive adjectives and lay them at the feet of the resident. The resident sat in his chair in the center of the gathering with his arms folded against his expansive torso, and occasionally favored a particularly exceptional offering with a bit of a nod and a slight upward twist of his mouth.

Finally, the last person offered up his praise. As befitted the established tradition, that was the Vice President, who set a new record for the number of times he compared the resident of the house with the greatest humans who had ever set foot upon the planet. He extended his own record for the number of times he declared his undying gratitude at having the opportunity to serve the resident. With that, the resident of the house uncrossed his arms, and began to enunciate the reason for the meeting.

“I was just in a meeting, they were telling me, it was impossible to get to 270, but we did it, a massive things even though there was no collusion, no collusion with the Russians, though the Democrats did have collusion, they got that dossier, they used it to spy on me, no way that we had collusion with the Russians, but those Democrats, they took Hillary’s e-mails and sent them to the server which they bleached. I mean, can you believe they poured bleach all over the server?” As he spoke, he picked up several ball bearings that were arranged in front of the resident, and began to turn them over and over in his hands.

He began to speak with more urgency. “Now, the Democrats want us to open our borders, want us to stop spending money for defense, they want us to surrender. SURRENDER!” He slammed his hand down on the table and the ball bearings scattered all over the table. Several people hurriedly chased after the rolling bearings, and gathered them and placed them back in front of the resident.”And there’s good people on both side, both sides, nothing wrong with being in favor of your race, those blacks have their own organizations.” He looked up and down the table, watching the exaggerated nodding of the heads of the meeting participants. He really had them in the palm of his hand. He looked down where his hand had found the ball bearings and was twisting them around, again and again.

“We don’t need those rapists, those criminals they are sending from their shitholes. No way they’ll ever want to go back to their mud huts, we need more Norwegians here. And we can make it happen. Now my people have told me of something that happened a long time ago – long ago. They wanted the people sent back over to Africa, to Liberia. That’s what we can do, get all of them sent back to Liberia or some other country over there. They won’t be taking a knee while our anthem is playing if they’re back home in Africa. We can do it!”

There was a stunned silence in the room. But slowly, a murmur began to emerge from the throats of the meeting participants. It swelled and was amplified as everyone joined the chant that became a coherent call. “We! Can! Do! It!” The chant echoed off of the walls, and soon even the staid Republicans were dancing around their chairs, arms linked as they circled around each other. The crowd was psyched. They were enraptured. They were prisoners of the resident, sharing in his delusions, unaware that what they had just committed their own political suicide. They had just been shown on live TV agreeing to a new proposal to forcibly re-segregate the country by expelling their fellow citizens.

There was one participant in the room who had thought this through. His voice called out to the resident. “Do you think maybe folks will think this is racist?”

The change that came over the resident’s face was startling. A flush of red colored his visage, and his mouth extended forward as spittle flew from his lips as he shouted. “How dare you! How dare you question my plan! My plan is the greatest plan ever made. I am the greatest! And who are you to question me? You all can kill yourselves for all I care. Come along, Mike.” The Vice President sprang to his feet and quickly followed the resident, who was storming out of the room. Soon afterwards, the cameras captured the images of the Cabinet secretaries, Senators, and members of the House all began to fall over themselves, searching for the tools to effect their own demise, which played on and on until there was no movement left in the room save for the slow spread of blood across the table and the rugs.

The detective turned off the replay of the scene, and turned towards his assistant. “I can remember when the resident started. There were Republicans who would stand up to him. They told him when his conduct was unacceptable. They claimed they’d never work with him. Then he won. And they slowly, slowly fell under his spell. You could see it with Graham. He’d been quoted as saying that he was a kook, was unqualified. But recently, he said the problem with the press was that they were calling him an unqualified kook. He’d been captured. It happened to all of them. They realized this was there one, best chance to implement their goals of cutting taxes, pleasing their donors. They never understood they were selling their souls in the exchange.” The detective stood up, and got ready to leave the room. “No point in investigating further. It was obvious that these prisoners grew to believe whole heartedly in his mission, so much so that they were willing to follow his off-hand suggestion to its logical conclusion.”

He left the room and the medical teams came in and started to remove the bodies inside of the cabinet room.