And the living is easy. This is a follow-up to my post a year ago when I evoked the bucolic aspect of my summer environment during the height of the summer season. Well, it is that time of year once again. As you can see, the new generation of hooved rat has been born, and is doing its best to persuade me that all members of the species are cute and adorable. So I find myself conflicted, deciding to not use my slingshot to poke at the mothers of the fawns that I find in my backyard. So far, I’ve seen one doe with a single fawn, and one with two. Since I don’t keep track of each deer around, I have no idea if that is the population growth for the year, but I’m good with that.

A week ago Sunday, we had just returned from a trip to NY late on Saturday. Accordingly, we decided not to make it to church on Sunday morning, and thus I was outside on my front porch, perusing the paper and sipping coffee, when it began to rain. It was not a normal rain, it was pouring down rapidly, so I looked at the drain in our driveway to ensure that we weren’t getting flooded. No problems. But then, the culvert across the street got blocked up and all of a sudden, all of the water from the hillside above us was cascading across the street and towards our driveway and drain.

The street drains rapidly plugged with the same vegetable matter that had plugged the culvert, and muddy water inundated our driveway and blocked the grate in front of our garage door. It knocked down my simple paving block retaining wall, and ran across the yard, both above and below my car in the driveway. Having lived in the house for over 25 years, we had taken preventive action to keep water from infiltrating our garage and our lower floor. This was the first test of our new earthworks and we were pleased to find that no water made it inside of the garage except for a minor irritating amount that could be washed out with a hose. None of this 6″ of water soaking all of the miscellaneous material found inside of a garage. No mud coming into the lower floor of the house, requiring commercial assistance to prevent mold formation. I was pleased that I only had to move a bit of dirt and replace blocks in the retaining wall to return to pre-flood status. The picture shows the flow overwhelming the culvert across the street.

The tomatoes and peppers are in their peak pre-BLT days. Lots of foliage, lots of small tomatoes set on the vines, but nothing ready to eat yet. Tomatoes got set out late this year because I had to do the deck cleaning and waterproofing before I wanted to set out the plants. Thus it was late May before I managed to get the plants out on our deck. The deer have still not figured out how to climb up the steps of the deck to get to the plants. Speaking of our deck, we moved into our house in 1992. At that time we had a deck made out of cypress that had clearly not been taken care of. We figured the deck was built sometime in the 1970’s, but it was nearly at the end of its useful life. We replaced the deck in 1996, and now our “new” deck is probably about the same age as the one we replaced. It really shows the advantage of ongoing maintenance – our deck has no wood rot or pitting problems, and the wood looks nearly like new. At this rate, the deck will outlast us.

We have our hummingbird feeders out, and they receive a lot of attention. It is too early in the summer for the alpha male hummers to set up ownership of the feeders, as they are still content to take their turns. But what was surprising to me is that another species loves the hummingbird feeders. The flickers are opportunistic feeders, and they will slowly draw nigh to the feeders, assessing the behavior of the humans who are sitting outside where they live. Eventually they start to suck the sugar syrup from the feeders, gaining sustenance from the red and yellow flower imitations. Flickers are omnivores. I have seen them on the ground, stirring up insects to munch upon. They also seek insects like other woodpeckers. Their ladderback feather patters and their clear call remind me that we are but trespassers in their turf. The other species we have a lot of this year are mockingbirds. They perch on the various wires leading to the house, and share their soliloquies of all other bird speech. I’ve often wondered what evolutionary advantage it is for mockingbirds to duplicate the sounds of the birds around them. That wonderful on-line source, Wikipedia, says that the birds sing the songs of others in order to convince rivals that this turf is already overpopulated with birds, and it is not to your advantage to stick around. My thought is that mockingbirds can be seen as lounge singers, doing cover songs of other birds, and it is up to you whether you think their act is good enough to stay for another round of drinks.

Speaking of birds, in the summer one of my favorites is the finch family. It’s really family groups, as 5 or 6 finches come to gather around our feeder full of thistle seeds. You can hear them coming from far off as they chatter flying up to the multiple perches available to them on the feeder. Occasionally a chickadee will share a perch, but mostly it is the red and yellow finches who take turns on the feeders. Since they are messy eaters, they spill as much as they eat, which spawns a whole ecosystem of other animals cleaning up the spoils. Mourning doves and sparrows hop around on the ground, and chipmunks scurry about, finding the whole seeds that have fallen from the feeder. It’s a good thing that our two black cats have gotten older and are not much interested in going outside, because chipmunks are definitely one of our cats favorite prey. Right now, the chipmunks are catching a break instead of being caught and eaten. 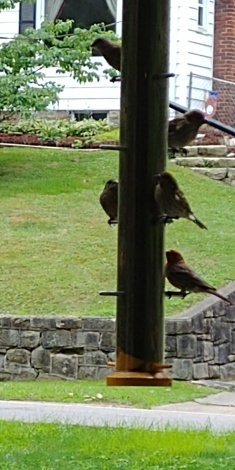 Summer is if nothing else, a state of mind. We have the great fortune to be able to slow down in the summer, and enjoy the late afternoon warmth while enjoying our favorite beverages. It is good to observe the rhythm of life going on around us, knowing that we are doing our small bit to keep things going by providing space free of herbicides and pesticides, allowing nature to coexist with us on our bit of West Virginia.

All pictures by the author.