When can you feel a shadow? When the shadow is cast from a team pennant flying over Yankee Stadium in the hot summer sun. I felt the coolness when the flickering flag blocked the sun’s rays momentarily. I went to the descendent of the House That Ruth Built for an afternoon game with Seattle, while the orchestra that I came to see was busy with other tour activities. I braved the NY subway system, trying to find the right side of the platforms to head on out to the Bronx. On the outbound leg, I was suddenly overwhelmed by a group of middle-school students coming onto the train, along with a beleaguered teacher. The energy and interplay of this group of students was intense, and I enjoyed watching it, while I did say to the teacher that I thought she had her hands full. They left on one of the stops in Harlem.

The game itself was exciting, but most of the action happened in the first two innings. By the end of the top of the 2nd, the score was 4-2 Yankees. The game ended at 4-3. I saw three 2-run homers, including one by the Judge. I saw another home run taken away by a remarkable catch in center. And then the game settled into a pitcher’s duel. 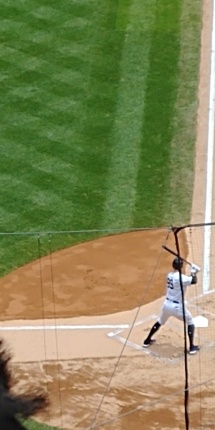 One of the activities the orchestra went on was a harbor cruise. This tourist staple was complete with a guide who gushed about the history of immigration on Ellis Island, and gave glowing praise to the ideals represented by the Statue of Liberty. We heard about how the nation became a nation of immigrants, welcoming all to our shores, our nation being the embodiment of an open society. The passengers on the cruise represented the diversity of the world, with large groups of Asians, and many other passengers from throughout the world. Our group of 50 West Virginians added to the mélange of cultures on the ship.

As we cruised on our return past Ellis Island, I was struck by the stark difference between the canned words of the tour guide, with the situation on the southern border of this country. Here was our administration, deliberately causing trauma in families by pulling children from parents, then separating them and keeping them in different facilities, sometimes thousands of miles apart. This administration that has been in control of the reins of government for 16 months, suddenly implementing a drastic escalation of the zero tolerance policy. What was abundantly clear was that the amateurs who are running our government had given scant thought about how to ensure there was a system to link parent to child, so they could be reunited. The amateurs had not built facilities that could handle the huge increase in detentions. Instead, they implemented it and then were incredulous when there was a backlash against the cruelty inherent in this forced separation policy. Even this week, we saw Jeff Sessions attempting to make light of the situation by claiming that all those who objected to the policy were to be found in gated communities, and they would gladly separate trespassers to the gated community from their families. I heard the echoes of “Let them eat cake”. 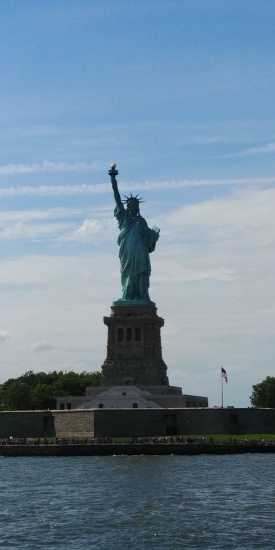 Whatever your feelings are on the increased prosecution of illegal immigrants, even of those who try to follow the rules and are claiming asylum at recognized crossings, I cannot see how you can be in favor of the splitting of families for what is in essence a misdemeanor crime (first time offense of crossing border illegally). This is not what we as a nation represent. Our national mythology is that we welcome the immigrant, and are willing to evaluate each immigrant’s story based upon well-established principles for admission to this nation. I heard that mythology reflected in our tour guide’s script that she probably repeated 5 or 6 times a day. It is clear, though, that any more it can only be found in mythology, since it no longer represents the present state.

This nation has always had a conflicted history regarding immigration. At various times, it has been the Germans, the Irish, the Italians, the southern and eastern Europeans, the Chinese, all of these groups have been savaged as they were allowed into this nation. Each time, the new group came in and established their own civic traditions, and eventually those traditions merged into the national culture with the passage of generations. Now we are in a world where the potential number of migrants greatly exceeds our capability of assimilating them. Combining that with a leader who evokes fear of others, who can only see the bad in those from outside instead of the good, and you end up with a perfect storm for those who were unfortunate enough to have bought into our national mythology and believed they would be welcomed into this nation.

The recent history of trying to resolve the immigration system, and the status of those already in the nation illegally, is replete with outlandish partisanship. Especially since the election of the Tea Party fanatics who view any mention of a pathway to citizenship as being traitorous, the well of bipartisanship has been poisoned. Now we have efforts from the House of Representatives at forcing a discharge petition to allow free and open debate upon the House floor. The beleaguered House leadership, not wanting to cede control to the possibility of bipartisan legislation, instead tried to force consideration of two different proposals depending only upon Republican votes for passage. It was heartening to see both of those efforts smashed into bits by the final votes. I can only hope that those who were pursuing the discharge petition renew their efforts, and attempt to develop a bill that can find supporters from both parties. Only then will we take the first steps towards healing the national divide on immigration. Only then can we hope to deal with the root causes of the problem, rather than dealing with the symptoms when they arrive on our border. And only then will we possibly develop a sustainable system for bringing new residents into our country, where their skills and energy can help to revitalize this nation’s communities and economy. Only then can we Make America Great Again!

All photos by author.