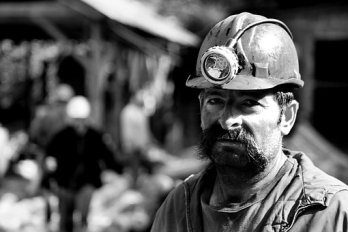 You can’t make this stuff up. The West Virginia Republican Senatorial campaign has three leading candidates. One is the current State Attorney General, who put down roots in West Virginia in 2012 just long enough to qualify legally for election. One is the current third district Representative, who changed from Democrat to Republican in 2013, after having served in the State Legislature for over 20 years as a Democrat. And one is — Don Blankenship.

Don Blankenship, the former CEO of Massey Coal who inspired fear among his corporate subordinates when they dared to place safety first before coal production, he who was imprisoned for a year for a misdemeanor offense of violating Federal mine safety regulations, he who was the head of the company when 29 miners died in a totally preventable coal dust explosion, this person is making a serious run for the US Senate.

You would have to have lived in this section of Appalachia for decades in order to gain a full perspective as to the true nature of Don Blankenship. In 1985, while he worked for a Massey coal subsidiary, a bitter strike against Massey roiled the hillsides of West Virginia and Kentucky. Violence was common, as union supporters fired guns at replacement drivers and workers, and replacement workers struck miners with their coal trucks. In the end, the miners agreed to go back to work, but under the terms of the old contract, not the new nationwide bituminous coal miner contract that the union was trying to get Massey to adopt. During the strike, armed guards and replacement workers were housed in barracks at the mines, reminiscent of mine conflicts in West Virginia of the 1920’s. Don Blankenship became the voice of management, decrying “union terrorism” as he justified the measures Massey took to ensure continuity of operations.

Once the strike was over, Massey evolved into a company that kept buying up union coal mines, shutting them down, then reopening them as non-union mines. The power in the mines swung back firmly in management’s direction. Blankenship’s fortunes rose as his stature as a union-buster grew. He became CEO of Massey and gained a reputation as someone who disdained the regulations imposed upon his industry by the government. Within Massey mines, code phrases such as “red pens” would alert miners when government inspectors came to conduct inspections. That enabled the miners to pretend to be obeying all requirements while the inspectors were present, then get back to “running coal” once the heat was off.

Eventually, this culture of corporate evasion of regulations came to a head, on April 5, 2010, when the Upper Big Branch (UBB) mine was enveloped by a coal dust explosion that killed 29 miners. Coal dust, like any organic material, is capable of generating an explosion that will follow through mine chambers as long as there is dust to ignite. Apparently, there was enough dust to cause the explosion wave front to extend for thousands of feet underground. That is a lot of coal dust.

Don Blankenship refused to accept responsibility for the disaster. He evinced a theory that a sudden and massive influx of methane at the mine face overwhelmed all of the safety efforts that Massey used, and caused the explosion. Not only that, but he insisted that the Mine Safety and Health Administration (MSHA) required Massey to use a ventilation plan that significantly contributed to the damage of the explosion. All through the investigation where it was conclusively shown that poor dust control was the primary reason for the size of the explosion, Blankenship railed against the investigators, claiming that Massey and Don Blankenship were being railroaded.

I was amazed that in late 2014, Don Blankenship was indicted for Federal crimes associated with the UBB disaster. There were two felony charges relating to security fraud and issuing of false statements. These charges were related to misleading statements that he made after the explosion to minimize the impact of the disaster on the Massey stock price. There was one misdemeanor charge pertaining to conspiring to violate mine safety regulations, the actual charge that pertained to the accident and the lives lost. He was convicted of the misdemeanor, acquitted of the felonies, and in 2016, he was sentenced to a year in Federal prison on the misdemeanor charge. It is an indictment on our judicial sense of priorities that the securities fraud was viewed as more serious than the charges related to the actual killing of 29 miners, but I was happy to see any semblance of justice against the prevailing corporate culture of the mining industry.

In a world that retains a sense of morality, this would have been the end of Don Blankenship as a public figure. He would have served his time, then lived his life at his home in Las Vegas with the millions of dollars he received during his decades at Massey. But this man lived for more than money. He wanted revenge, and exoneration in the field of public opinion. During his imprisonment, he paid for the publication and mailing of a booklet describing what really happened in UBB, and how it was the political enemies of Don and those who hated the coal industry who were really to blame for the deaths of the 29. We received one of these pamphlets in the mail, but barely glanced at it before placing it in the recycling bin. As it turns out, the propaganda in the mail was only the first blast in Don’s redemption tour. He kept appealing his conviction up until the last week of his imprisonment. Then, in 2017, he announced that he was running for Senate from West Virginia.

When I saw the first of his campaign commercials late in 2017, I was convinced that he was using the vagaries of campaign finance to enable him to use unlimited funds to continue his crusade to clear his name. Don was by far the first West Virginia Senate candidate to place ads on TV. As time went on, however, I sensed a change in the tenor of the campaign ads. The guy actually thinks he can win. This from someone who has the charisma of a toad. Check out one of his last-minute ads if you dare:  Blankenship campaign ad

Don Blankenship has his primary residence in Las Vegas. He has long had a home situated on the Kentucky side of the Tug Fork river from West Virginia. His residency credentials for West Virginia are tenuous at best. But this example of human excrement is trying to convince enough voters of this state that he has always been misunderstood, and under-appreciated for all he has done for the hard working coal miners of the state, offering them a pathway to black lung disease, or if they are really lucky, immolation in one of his under-maintained mines. I am hoping that this Tuesday will represent the absolute repudiation of Don Blankenship, and cause him to crawl under a rock out in his Las Vegas hacienda, never to be seen in this state again.