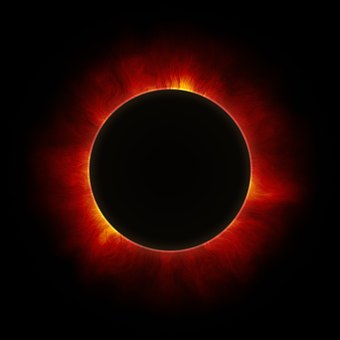 It’s coming! An event that long ago showed up as a dream marker upon my imagined future life trail. The eclipse of August 21, 2017. As a child I was fanatical about all things related to the cosmos, and I devoured all of the books I could about astronomy and cosmology. I confess that I learned I was a nerd even before the word was invented. How many 2nd graders do you think had a strong conviction on the then current scientific controversy on whether the universe was the result of a big bang, or whether the steady state theory was the explanation for the observations of astronomers. I was quite firmly on the side of the big bang. This was a year before the discovery of the background microwave radiation that was the echo of the big bang, and there were indeed two schools of thought on the explanation for the observed universe. Being proven right on the big bang led to many more theories that I expounded upon during my childhood.

Since eclipses are known, predictable events, way back in the 1960’s I realized that if I was alive in 2017, a total solar eclipse would happen right over my head in Lincoln, Nebraska. That was the first total solar eclipse that I would be able to attend without travel to a foreign country (and back in elementary school that seemed to be so far out of reach). Now fast forward over 50 years, and I am now in the position of nervous anticipation of the event of August 21. I have our hotel reservation near the band of totality. Our two sons are planning to join us for the final journey to the strip of land that will experience darkness in the middle of the day.

Two things cause me nervousness in anticipating the event. First is traffic on the morning of the 21st. I will be 70 miles outside of the band of totality. I’m avoiding the interstate like the plague, but there will still be thousands who will follow the road that I will take, slowing our progress. I will probably antagonize my family by insisting that we get up and leave much, much sooner than we really need to, just to make sure that we get there in time. Ideally we want to go about 130 miles to our preferred viewing site, but the absolute must is to make it to the band of totality.

The second thing that causes me anxiousness? The weather. We will be in central South Carolina, and the sky conditions in this part of the south are iffy at best, both historically and in the extended weather forecast. I can say to myself that if clouds obscure the view, at least I will experience the coming of sudden darkness, followed by an instant morning, But that will never substitute for the absolute thrill of seeing the corona emerge, shining eerily over the surface of the darkened side of the moon. It would be extra special if there were a solar flare at the time that you could see, but just seeing the physical manifestation of the solar wind will be awesome.

Well, you pay your money and you take your chances. South Carolina offered the only opportunity for my entire family to attend this event, so we will be going in a spirit of optimism, rather than pessimism.

If we miss it this go around, there is a subsequent eclipse coming up in 2024 that bisects the country again. I hope to be able to travel to it as well, but the first shot I have will be my best hope.