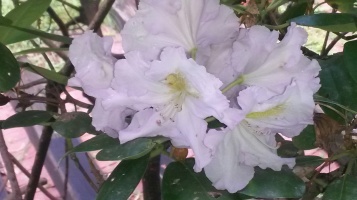 I’ve been at a loss for words lately. Even though spring burst onto the scene, and new life is everywhere, when it comes to humanity, the news all seems bad. The amateurs leading the US government seem intent on single-handedly overturning 75 years of alliances, all in the name of having our allies pay their fair share. Agreements aimed at reducing the risk of nuclear arms construction are arbitrarily abrogated, and we seem to be poking at the hornet’s nest that is Iran with a stick in order to engender conflict. Meanwhile, on a peninsula far, far away, the object of a love affair with the US President is acting like a spurned lover, and casting missiles into the ocean between the peninsula and Japan. The Russians ponder how best to bend the pliable public opinion in the US to their benefit in the next election, while this President disdains any notion that his election was in any way due to the overt and covert actions from Russia in the past.

It is clear that the Republicans in the Congress are victims of the Stockholm Syndrome, having been co-opted by the entity who took the Republican party hostage in 2016. Thus they are willing participants in the ongoing struggle to avoid any legitimate oversight of the actions of this administration. Meanwhile, having become emboldened by the departure of more mature members of the administration, and by a superficial reading of the report brought forth by Robert Mueller, this administration becomes intransigent and refuses any and all requests for Congressional testimony or submission of documents. They laugh at any requests for cooperation in the multitudes of investigations brought on by this President. Aided by the Stockholm Syndrome sufferers, they continually chant their mantras of no collusion, no conspiracy, even though if they actually read the Mueller report they would learn that is not his conclusion. When Mueller cited his conclusion that the Department of Justice’s own precedent would not allow him to call for indictment, they took that as a declaration of exoneration and have continued to scream that into the ether. And the gullible fools who follow this pitiful President, lap up the curdled milk offered them by the smirking members of this administration.

Meanwhile, the opposition to Trump in the Democratic sphere is teeming with those who are crawling over themselves in order to reach the brass ring on their carousel. In order to gain even momentary ascension in the media spotlight, they exhibit their brazen narcissism as new candidates continue to emerge into the race. They make statements of economic incomprehensibility in order to appeal to even a small fraction of the electorate. And why so many? Of course, it is because they are the chosen, and only they can solve our problems. Kind of similar to the statements of the current occupant of the office, who was convinced that he alone could solve things. They run the risk of causing the electoral discussion to veer so far left that the enormous advantage the Democrats hold in opposing this unpopular President will be abandoned as they scare the middle into clinging to what has now become familiar.

If you look for succor elsewhere in the world, you will find none. The war in Yemen, a proxy battle between Saudi Arabia and Iran, continues unabated, and has ushered in the Four Horsemen of the Apocalypse into permanent residency at the tip of the Arabian peninsula. Aided and abetted by the US, where in the first act of guts in decades by the Congress, they passed a measure to cease support for Saudi Arabia, only to have it vetoed by the President in his continual attempt to punish Iran. Turkey is continuing its slide into dictatorship as Erdogan forces a do-over of the Istanbul mayoral election. France is hamstrung by yellow vest protestors who turn every weekend in Paris into an obstacle course. And Britain is evenly split between those who wish to force exit from Europe, and those who wish to maintain ties, and as a result, the politics there have caused complete government breakdown.

Meanwhile, reports come out showing that humanity is thrusting an eighth of the species of life into peril of extinction. Glaciers continue their steady retreat, threatening the water supplies of hundreds of millions of people. Shrinkage of Arctic ice opens up a new realm for human exploitation, and all our fetid Secretary of State can say is “New ways to make money!” An administration that actively rebuts scientific evidence is insistent upon eating our supply of seed corn as it slashes funds for research for our future. And the budget deficits keep growing as far as the eyes can see as adherents to the failed, flawed economic theories of the supply-siders once more prove their complete divorcement from reality.

You’d think that with all of this surfeit of bad news, I’d be ready to throw in the towel. Strange thing, though, I can still feel hopefulness. I can be hopeful that this nation will awaken from its strange hypnotic trance induced by our con man in chief. I can be hopeful that corporate executives will be found guilty of fomenting addiction through their marketing strategies, and that the tsunami of human casualties from opioids and heroin will recede in our region. I can be hopeful that the seeds of spring turn into the salads and vegetables of summer. I can be hopeful that the trees we planted last year will grow strong enough for us to remove the deer shields around them. And I can hope that those of us who believe in common sense, rationality, and the rule of law will prevail in this country.