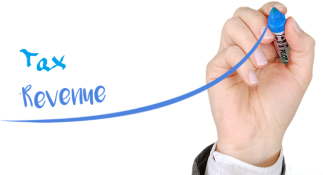 Economic growth as far as the eye can see! A thundering flood of growth, enabling total tax revenues to increase while cutting the absolute share of income going to taxes. That is what Congress in the US have pledged will happen by their adoption of yet another version of trickle down economics. This post is not intended to discuss the merits of the tax bill. Instead, it is intended to discuss the holy grail that we seek – economic growth. What is it, and how is it different now than it was during the time period that Donald Trump seeks to return us to – when America was great.

Back in the 1950’s and 1960’s, the economic cycle was centered directly on manufacturing things. When the economy was good, factories that made things expanded. Capacity of making things kept increasing. Eventually, capacity exceeded demand, and the manufacturers of things cut back on production, procurement, and people. Layoffs would occur, and since the economy was in synch, cutbacks in one segment caused cutbacks in others. Within a few months, or a year or two, the imbalance in supply and demand would favor production, and the economy would reverse its downward trajectory and start expanding again.

This cycle held firm through the post war period, until the 1980’s. The byproduct of these economic cycles was inflation, especially when it was accompanied by deficit spending from the Federal Government. Severe fever medicine was supplied to the economy through crippling interest rates. I remember buying my first house in 1982, when I assumed existing mortgages. One was a smaller second mortgage with a 15% interest rate. The inflation fever broke, and the economy of the US began a glide path enabled by falling interest rates.

Throughout the 1980’s and 1990’s, the economic cycle began to change. US manufacturers, having grown complacent servicing their captive market, began to lose market share to those who paid attention to the voice of the customer and improved the quality of their products. Often those were foreign producers. Auto manufacturing was the poster child for this transition. But the change to the economic cycle accelerated due to the end of the Cold War, when the entire world became open for production. Now began the exodus of manufacturing jobs to lower wage nations as China became everyone’s favorite supply chain partner. No need to worry about those union workers and the environmental regulations – we will outsource both our labor and our pollution.

But a strange thing happened in the 1990’s – the economy grew even though the manufacturing sector declined. How was this possible? It was because an increasing portion of our economic output depended not upon the manufacture of things, but upon the manipulation of electrons. With the advent of the internet, it enabled generation of economic activity that relied much less upon the manufacture of things. Compare and contrast the economic activity of the old Ma Bell phone company, with their offspring, the cell phone and internet service providers. Since phone service was viewed as an essential public good, the old phone company received a monopoly to service a region. They were regulated so they would be ensured of operating at a profit, but not so much that their fees would generate a backlash. Then they had to maintain their system of copper wires and switching centers, and received payments from each household for renting their phones, for local service, and charges for each long distance call made by a subscriber.

Now look at the telecommunications sector today. Cell phone service is rapidly replacing land lines, and in order to provide cell service, it requires dispersed cell towers instead of a distribution network of fibers and poles. Much less stuff is required to maintain a network, meaning that manufacturing and resource use decreases, while the economic activity from cellular services grows exponentially. Then you have the alternative service providers, like those who bundle internet, cell service, and TV in one package. And then there’s the lucrative practice of selling data. Quite literally, the economic activity generated by electronic waves means that money is being plucked from the air. If you compared the fraction of income that was spent on phone service back in the 1970’s, with the fraction of income spent on cell service, data features, and internet service now, far more economic activity is occurring in the telecommunications sector now than in the era of Great America.

If you examine the economy over the last 50 years, manufacturing still maintains a high share of economic activity. But that share is spread more thinly across the landscape, since manufacturing productivity has increased so much, and manufacturing employment has declined precipitously. We are now at the cusp of yet another inflection point in productivity. Robotics and the use of Artificial Intelligence will replace the human worker at an increasing rate. In fact, one unintended consequence of the tax bill may be that companies who repatriate money from overseas and invest it in the US, choose to invest it in automation that further reduces the human input.

So it is possible to increase economic activity while decreasing physical inputs into an economy. We live better by consuming less. That is undoubtedly good for the environment, but how does that affect the world of labor and enable those who work to have motivation to improve their lot in the future?

The premise of the Make America Great Again movement is that we can withdraw into our own borders and internalize manufacturing, thus unleashing the ability to generate economic activity in every town in the nation. Manufacturing is viewed as the panacea that serves as a labor force relief valve for those who choose not to continue education. Yet now, manufacturing labor requires significant knowledge skills beyond that of a high school graduate. Many manufacturers despair of finding qualified candidates for their openings. Even if a candidate is able to pass drug screens, they are not willing to commit to a rotating shift lifestyle. And despite the desires of leadership to isolate the US economy, we are competing globally, and no one else owes us any economic favors now.

Economic expansion in the era of technology requires making a commitment to provide the labor force for high skilled manufacturing. This appears to be a requirement of the public sector to provide the training required, due to the failure of the private sector to serve as a competent trainer for skills. Think ITT technical and other private educators who delivered only excess debt instead of marketable skills. Community college needs to serve both as the foundation for trades education, and as the entry level for bachelor degree programs. It will require close coordination with industries so as to deliver potential employees with enough knowledge to be worth hiring. This increased support for community colleges is essential if we want to benefit from the leveraged growth that new manufacturing jobs can provide.

The other area where growth can be generated is in developing an extended plan for upgrading our deteriorated infrastructure. There are some places where private / public partnerships can be created to build new features, but that will result in ongoing expenses to ensure investment return to the private entity (think more and more tolls). Still, the huge unmet need in renewal of our existing infrastructure must be met by government expenditures. Again, this can be funded by the users of the infrastructures, but the traditional techniques like a gas tax will not work in the era of electric vehicles. At some point, those who keep trying to shrink government will have to realize that targeted tax increases are required in order to keep our civilization vibrant and productive, and to increase economic growth. The recent tax bill where simplification was touted, but the net result was to redistribute income up the income chain, shows that we as a nation are not ready to address the real issues facing our country. Maybe when multiple bridges collapse due to neglect we will realize our folly.