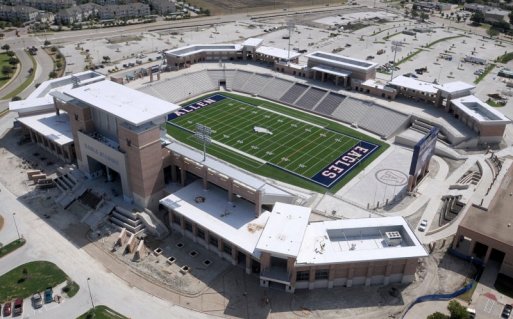 Compare and contrast the priorities of two adjacent states. In an AP story today, we learned about how Oklahoma’s conservative approach toward taxes has resulted in teachers becoming eligible for a house from Habitat For Humanity, and their children becoming eligible for reduced price school lunches. See the story here:

Meanwhile, in a CNN story, we learn about the ongoing arms race in Texas football stadiums, where new high school stadiums cost as much as $70 million dollars. See the story here:

I can think of nothing that displays the misplaced priorities of the US better than these two examples. In one state, teacher’s pay has stayed stagnant for a decade, while its GOP-led legislature maintained extremely low tax rates on oil and gas extraction, and in 2014 passed legislation to cut the personal income tax in the state. This has resulted in Oklahoma per pupil spending on public education to decline by a quarter from 2008 to 2016. Meanwhile, a spokesperson for Continental Resources, an oil extraction firm, says “We don’t have a revenue problem in Oklahoma. We have a spending problem.”

Across the Red River in Texas, things are full speed ahead for funding for worship spaces for the Texas state-sponsored religion, high school football. Katy (a Houston suburb that is probably now just wanting the rain to stop) has just completed work on their $72 million dollar facility, replete with luxury boxes and a $2 million dollar video replay board. Granted, Texas does support its teachers better than Oklahoma does, with their average teacher pay about 32nd in the nation as compared to Oklahoma’s position at 48th. Still, the excess public funding for athletic facilities, and the excess adulation given to young male athletes is out of all proportion to the true value of high school athletics.

Can you imagine what it would be like to work for a school system where they passed bond issues to improve the chemistry labs for their high schools? Or one where they upgraded their biology laboratories with modern microscopes instead of using manually focused machines that were obsolete in the 1970’s? Indeed, over and over again we see that the priorities of this nation are to prevent funding for new school academic facilities, preferring instead to cut taxes once again in order to stimulate economic activity. Ask Kansas how that’s working out for them?

We suffer in this country from a surfeit of selfishness. Republicans proudly commit to the principles of Ayn Rand, advocating full, pure, uncontrolled, unregulated laissez-faire capitalism as the only valid moral code. We no longer recognize a collective need for action and spending unless we ourselves directly benefit from such spending. How many comments on message threads state “Why should I support spending on schools? I have no children going to school.” Such flawed reasoning holds that since I have mine, and have already benefited from common societal spending, I have no duty to the rest of society to enable others to potentially gain the same benefits as I already accrued.

Indeed, you see many screeds in the blogosphere about the unfairness of being taxed at all, that all taxes represent a taking from someone who has earned everything they have. If our entire society thought and acted like that, then we would live in a world of constant violence, where only those who could spend for defensive capabilities would be allowed to hold on to their own hard-earned assets. Taxes are necessary, and the belief that lowered taxation will always result in increased economic activity, so much so that it will lift the entire society out of poverty, has been proven demonstrably false. State after state has attempted that as a prescription for stagnant economies, and in each case, the results have not met expectations. See Kansas and Oklahoma and their growth rates vs. that of California, who chose a different path.

The issue of spending on schools, both teachers and facilities, is symptomatic of the direction that this nation has taken over the last four decades. At the national level, we grew tired of a congressional appropriations process that resulted in infrastructure spending only where it benefited powerful congressmen and women. So we banned earmarks, and now have included all infrastructure spending within the discretionary spending caps which are falling further and further behind in meeting critical needs. Meanwhile, attacks on unions have created the image of the Teachers Union slackers, living high on the hog on our largesse while simultaneously shirking their responsibility to adequately educate our children.

It is certainly true that the past method for allocating infrastructure spending was fraught with manipulation and waste. That is not an excuse though for letting all of it rust away and collapse like the levees did in New Orleans. We need civic-minded politicians who are willing and able to accept the recommendations of experts, who can assign priority to the critical infrastructure upgrades that are needed. These experts must also assess the capabilities of our construction contractors. Since we have neglected necessary funding for so long, we cannot scale back up immediately with 2x or greater spending on roads and bridges. We need to ramp up the spending rate over time, and we need a plan that is longer than that of a continuing resolution in order to provide contractors with the confidence that they can procure additional equipment, and hire trained workers, and receive an adequate return on their investment. Not to mention that we need some sort of training protocol for those who would benefit from infrastructure jobs. I know, I referred to the ultimate oxymoron – civic-minded politicians. In this day and age of polarization and political fratricide as practiced by President Trump, it is nigh unto impossible to conceive of a civic-minded politician. Put your disbelief away for a while, and just imagine a congress packed with such critters.

Likewise, public school education has suffered from waste, and a lack of accountability. It is unacceptable to have incompetent teachers protected from losing their jobs due to bureaucratic procedures. We need to enable the system to eliminate those teachers who do not perform, while increasing the pay so that the profession attracts more capable applicants who would actually be able to pay off their student loans. But it also needs to be acknowledged that we have failed our education systems by systematically refusing to upgrade facilities, voting down bond issues repeatedly until the very roofs start caving in on the poor students caught in the public school system. The solutions identified by the head of the Department of Education involves increasing the profit potential for investors in charter schools, affecting only a fraction of the total school population, instead of offering real assistance in enabling our school systems to succeed. We don’t need curriculum mandates and charter schools, we need assistance for teacher salaries and school facilities.

America was great when we had a firm commitment to public schools, and to public infrastructure. That we have meandered so far away from that commitment speaks to our failure to reinvest in our future. Are we that selfish that we opt for a fragmented and failing society just so we can retain a few more percent of our income? But the philosophy of conservatism since the days of Reagan keeps insisting that prosperity is just one more tax cut away. Sad. So sad.