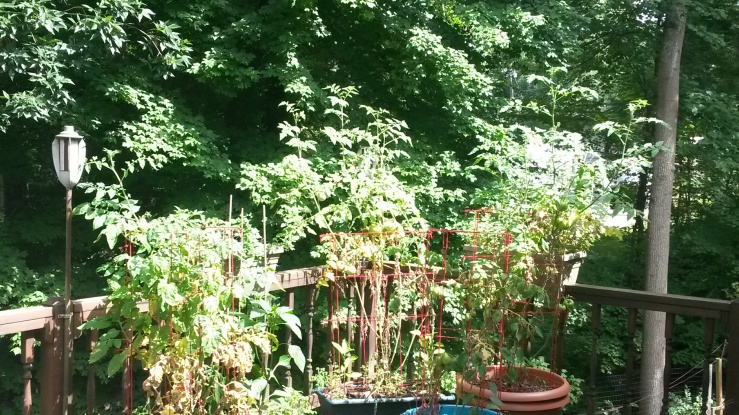 First tomatoes before the end of June. For me, in West Virginia, that sets a record. Salad tonight from the last crops of lettuce and radishes, and the first green beans will be this weekend. Summer time has burst forth in its lazy glory, with cats stretched out in their 90° pose, as elongated as their bodies will permit on the concrete.

Even for those who have retired, summer brings on another level of indolence. Time is not as critical, since lessons aren’t being held, rehearsals have all been put on hold till the fall, and the front porch beckons. Our outdoor living room is our front porch, complete with most of our indoor plants enjoying their exposure to completely natural light. We sit and watch the hummer wars play out in front of us. A hummer will be slaking its thirst when suddenly it is forced to retreat at warp speed due to the return of the alpha male hummer who has claimed our yard to be his territory.

I see our string of apple trees alongside the driveway begin to shake. Looking over, I see that once more, my hope of having a pie or cobbler made of our own apples will likely not happen, since the squirrels are already taking the green apples long before they would be ripe enough for my taste. I watch as a squirrel holds a McIntosh apple in its mouth, the apple just beginning to blush red, and the squirrel runs across the grass to the nearby poplar where it climbs up to enjoy its feast. At least I get entertainment value from watching them. I just wish they’d eat the crab apples. I’ve got tons of them, and they won’t even touch them. The crab apples have weighed down the branches so that they are leaning down, nearly touching the car below.

Nothing is better than sitting out in the morning on the porch, drinking coffee and reading the physical newspaper. Yes, we still receive the paper each morning, and savor it. Especially in the summer when the morning is still cool enough to enjoy sitting out on the porch. Watching the rest of the world go by and feeling so blessed to not have to leave each day to do my bit to move the economy along in my job. My part of the economy now is to consume, and drinking vanilla/coconut flavored coffee is a wonderful way to do that. 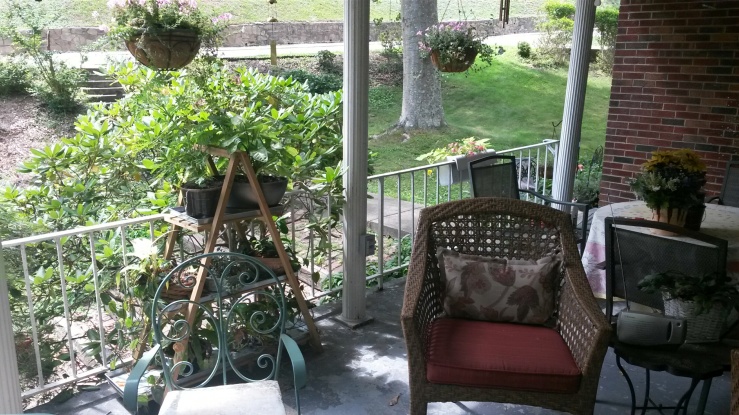 One thing that keeps on growing are the weeds. Since I use herbicides only for poison ivy, removing weeds is a labor-intensive operation. Just about the time that I complete ridding all the flower and vegetable beds of weeds, it’s time to start again. The other day, I was out weeding our brick walkway, being assisted by the cats, when all of a sudden our neighbor’s cat burst out of the Lenten rose in front of our house, swiftly followed by both of our cats. I had no idea that the cat was there, but it certainly caused excitement when it ran off. Fortunately, our cats didn’t follow across the street to the neighbor’s house. Turf wars are tough.

Looks like we have two does that had fawns this year. One has a single fawn, and one has two. Yesterday both of those families came down the hill and through our yard, along with a spike buck who went the opposite way back up the hill. To say that we are polluted with deer would be an understatement. We are now working on upgrading the landscaping of our sunny sloped garden in front by trying to find and grow deer-resistant perennials. Last weekend I put out about 10 new plants, and so far only one has been munched on by the deer. We can be hopeful.

It’ll be another month or so before I’ll start to look for bulbs to thin out. The old foliage has died back and I’ve pulled most of it out with the weeds. Probably the next time I’m out there weeding, I will see clumps of bulbs that have migrated all the way to the surface. Then I will dig out the cluster, taking 30-50 bulbs out and leaving about 10 in the original hole. The extras will go to other folks who want bulbs, and then I’ll plant the rest in some of the remaining places where we don’t have daffodils in the spring. Often that means going further down the hill to keep expanding the spring flower explosion.

This evening we will be enjoying some frozen concoction (that helps us hang on) on the porch while listening to the Pirates game on the radio. May you all have as great of a time enjoying summer as we do.

2 thoughts on “And the livin’ is easy”