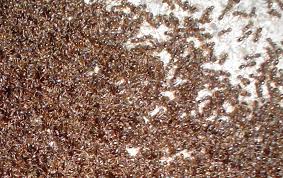 Have you ever wondered what an ant can sense? It is spring time, and ants invade our living space each year at this time. I am in our den with the computer, far away from any food source, but the ants are crawling over the desk, continually searching for some sort of sustenance. Once they find it, they are capable of bringing the knowledge of the food to their nest mates. Then the rush is on! A steady stream of ants soon emerges, one side marching to the food source, then the return stream marching back to the nest.

How can all of this activity be programmed within the bodies and brains of tiny insects? How can the colony have the capability to transform some members into nurses, taking care of the young, and some into warriors with enhanced jaws who will defend the colony to the death? I can still remember the sight of red ants fighting black ants as they swarmed across a sidewalk when I was walking home from school. Thousands of ants fighting and killing each other. As I examined them from the 40,000 foot perspective (from the ant’s perspective), I realized that warfare was not unique to the human world.

The concept of a hive mind is often used to describe the knowledge and functioning of insect colonies. The knowledge of the entire colony is far greater than the individual knowledge of any single member of the colony. Somehow the genetic programming for the members of a colony is able to define all of the individual roles found within a colony using the same genetic material. And then the entire colony becomes aware of a threat, and comes boiling out of the entrances of the nest. Chemical and pheromone clues help to spread the common knowledge across the residents of a colony.

What would be the view of an alien species, watching human activity from a 40,000 foot perspective? Would they watch the twice daily swarming of vehicles and people across our highways at rush hour and wonder what these small, insignificant beings were doing, and what was driving them? Are we that different from ants if viewed from a remote vantage point?

We as humanity have been blessed and cursed with curiosity. There is a tendency for many to believe that our species represents the pinnacle in life forms. Indeed, we even have the gall to claim that we were created in God’s image. Yet the curious are driven to investigate further, and that is driving the search for extra-solar planets across our galaxy. Our observational capabilities have grown incredibly over the past two decades so that we can now make precise determinations of the numbers and masses of planets that circle stars other than our own sun. I expect that soon we will be able to detect the signatures of gases in the atmospheres of these planets. And one day, we will see the tell-tale sign of oxygen in an atmosphere. The breath of life confirmed elsewhere in the galaxy.

Oxygen is a very reactive gas. If it is not continuously generated, then it will bond to the rocks and soils of any planet where it is found. Therefore, if free oxygen is discovered in an atmosphere, it is a clear sign that life forms similar to those on earth are living, and are generating oxygen. We would know that at least a form of life exists outside of our island home.

Knowing that life may exist outside of earth is one thing. Having knowledge that there is other life with a technological bent, able to communicate using the electromagnetic spectrum, or able to travel away from their home planet, is something else entirely. Almost as soon as radio telescopes were invented, they were used in the search for extra-terrestrial intelligence. Using human experience as a template, we realize that one of the first communication mediums we used was to send broadcast signals out into space, where they would bounce off of the atmosphere and return to earth and be picked up by sensitive receivers, otherwise known as radios. So we use this as a target to detect other civilizations in the galaxy. Now our planet is detectable at a distance by any species who can detect electromagnetic signals. Indeed, we keep scrambling to open up new segments of the electromagnetic spectrum because our need for connectivity keeps growing. The fuzz of noise coming from this planet keeps growing.

So the search for other planets where inhabitants are sending pictures of their dinners to each other keeps growing. It is now possible to use the planetary search process to identify those planets where we believe life can exist, and direct the radio telescopes to a precise location. We also are uncovering what are described as fast radio bursts. These are bursts of electromagnetic energy of incredible power, that we detect for only fractions of a second. They are gone and don’t recur. One theory about them is that they represent a source of energy being beamed towards a interstellar craft that serves as a propulsion source for these crafts. This sort of propulsion would enable a vessel to travel at near light speeds, so it would make sense that if we are able to detect them, they would flit across our detectors and be gone almost instantly.

The increased connectivity on earth though, continues to increase at an exponential rate. Even though humans do not have the ability to transmit chemical clues except in close proximity, it is now possible for a hive mind to develop via electronic communication. Flash mobs can be generated by social media, and flash mobs can be harmless (groups gathered in a social place to sing and / or dance), or threatening (groups descending upon a store to pillage). We all bemoan the shortness of the news cycle, and the shortening of the attention span for humanity. I can only imagine what War and Peace would look like if written solely in emojis. We all suffer now that Twitter has imposed a 140 character limitation on political discourse.

We now have the means to create a hive mind in humanity. Will we learn from it about our common natures, and use it to solve problems? Or will we form red ant and black ant colonies and swarm out of our nests looking to exterminate our perceived oppenents?